The grammar in this lesson is covered in chapters 2-5 in pu, lesson 3 in Pije, and pages 1-3 in Lentan.

Basic sentences about you or me in toki pona consist of two words. The first word is the subject mi or sina. The second word is the entire predicate. It describes something about the subject, and can function as a verb, adjective, or noun.

There are a lot of sentences in toki pona where what we call the verb in English is ambiguous or absent entirely. To say ‘you are big’ in toki pona, sina suli, there is no ‘are’. It may be better to think of this second word as an action, quality, or state of being.

Here are examples of each of these types of sentences:

Most of these simple predicates can operate in more than one of these capacities, changing the meaning of the sentence. Only context and common sense can be used to determine the most likely meaning:

When the subject is anything other than mi or sina, the particle li separates the subject from the predicate.

When you see li in a sentence, do not think of it as meaning is! Think of it as a marker that indicates the end of the subject, and the beginning of something about that subject.

sentences with mi or sina as the subject

With simple sentences of only two words, you have the choice to stack the glyphs, or place them side by side.

When building sentences, we work from top to bottom, and from left to right. Here are two examples of sentences built from the top down. The punctuation works as one more glyph in the stack.

placed in front, tucked behind

Don’t be confused when one glyph appears in front of or tucked behind the other. This has more to do with legibility than word order. Notice in the examples above, mi is behind pona in mi pona, is resting on moku in the vertical mi moku, and is in front of moku in the horizontal mi moku. All of these variations are acceptable, and as you work through more complex sentences, you will start to notice situations where one looks better than another.

Notice in both variations of mi moku, above, the period glyph runs horizontal along the bottom. This will always be the case. Punctuation marks at the end of sentences work like pedestals for the sentence block to rest upon.

Compare the two examples of sina pona, one with a period and one with an exclamation point. For the end of sentences, all punctuation glyphs work in the same way.

sentences using li between the subject and predicate

When the subject is other than mi or sina, li is located between the subject from the predicate. In sitelen sitelen, li works by acting as a container. li is nothing more than a line which runs out of the subject, and around the action or attribute in the predicate. Remember, down and to the right, so li must follow this pattern: 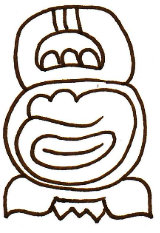 compare your English translations to mine:

the sun is big!