Language is the legacy of humanity

When trying to determine just what it is that makes humanity unique, the topic of language never fails to come up. It is the bond that holds societies together, the skill that allows us to share ideas; it is even the code on which our technologies run. When looking to understand the past, language is the remainder that brings the most reward, for nothing can bring the past back to life as vividly as language.

Although spoken language is in our nature, it is written language that acts as its best preservative. I have always been particularly drawn to written languages where visual symbols represent morphemes, or concrete units of meaning.

I had long wanted to work out a system of drawing that lent itself to language, where composition was determined not by visual principals, but by literary content. The problem that I ran into was always the immense amount of work that would be required in translating an entire language into visual components.

In 2007 I finally had the pieces I needed to move forward with this project, and added it to the registrar under the tag t47, now more commonly known as sitelen suwi or sitelen sitelen. The following is the list of resources without which I could not have accomplished this.

The initial solution came through toki pona, a language invented by Sonja Lang. As she described it at the time:

Toki Pona is a simple language designed to express the most, using the least. The entire language has only 123 words and 14 sounds. The grammar, although different from English, is very regular and easy to learn.

toki pona offered me the opportunity to work out a language based drawing for several reasons:

Sonja currently counts the “essential” words in toki pona as 137, and this number has grown and shrunk over time, but the philosophy has remained the same. At this point it should be obvious that this project could not exist without, or separate from, toki pona.

Early on in the process I had to make a choice to either invent a writing system completely unique to my own imagination, or study language and the history of written language. I ended up doing the later for two reasons, both inspired by toki pona. First, my complete ignorance in linguistics made the hubris of reinventing the wheel seem preposterous. The toki pona community was and still is filled with linguists and their enthusiasm for studying language was infectious. Secondly, Sonja carefully documented the origin for all of the words in toki pona, and this methodology of drawing from a rich etymology was something I decided to use as guidance and inspiration.

The word minimal is often used when describing toki pona, and this word informed many of my earliest attempts at this project. However, is was hard to pull away from the history of minimalism, and the stark industrial aesthetic it conjures from artists such as Donald Judd and Dan Flavin. There is another side to toki pona, which I felt hinted at a better approach: its humor and playfulness, and this ultimately ended up being much more fruitful.

I started moving the aesthetics of the project towards inspirations drawn from east coast graffiti and west coast comix. This was a style I always enjoyed filling my notebooks with, but it hadn’t yet made it into my other projects. The challenge for me then was to search for constant reduction of the elements, attempting to find a balance between visual interest and reproducible glyphs. Two artists who’s influence might be particularly noticable would be jim woodring and kenny scharf. 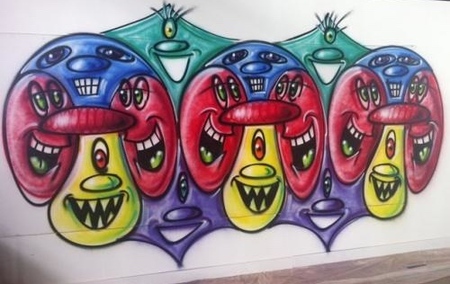 One of the first lexical sources I went to was a book I’ve had on my shelf since childhood, The Book of Signs, by Rudolph Koch, (Dover books, 1955). Many of these signs mapped well to the task at hand – water, fire, air, earth, sun moon – and may have influenced the final glyphs. Two glyphs influenced quite directly from this source are meli and mije.

Another principal that I drew from was Koch’s description of monograms:

It is sometimes difficult to interpret monograms, as their letters are often very much disguised, or turned back to front, or only partially drawn, so that it frequently requires great skill to discover the names concealed in them. 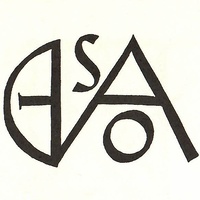 This same strategy of transformative aesthetic free play ultimately came to work for a number of the glyphs, including, for example, the one for sitelen, which includes the mouth from toki, a picture frame and image, and other associative elements combined and reduced through a number of iterations:

One of my first logical steps in understanding the principals of existing logographic writing sytems was of course to learn more about Egyptian hieroglyphs. The figurative nature of this system also helped my break out of the purely symbolic aesthetic and closer to the graphic style describe above.

While the very linear nature of Egyptian hieroglyphics did not help my quest for non-linear writing, one exception that I came away with was the cartouche, where a royal name was encapsulated inside of a glyph. As a method of indicating the capitalization of formal names in toki pona, this was something that stayed with me and made it into sitelen sitelen early on.

One of my longest areas of study during this time was in written Chinese characters, and I could not have done this without the excellent continuing education course offered at the New York Chinese School (紐約華僑學校), their particular emphasis on reading and understanding traditional characters, and how to recognize and use the radicals (部首). Understanding how radicals could be either phonetic components or semantic components had a profound effect on the construction of many of the more abstract sitelen sitelen, as I was able to use existing glyphs for further describe and realize the missing ones.

Examples of glyphs using the phonetic component “a”

Examples of glyphs using the semantic ‘x’ component from ala

One glyph that comes directly from Chinese is nasin, which takes it’s form from a “bubblified” version of Tao/Dao/道. toki pona has a deep and returning connection to Taoism, and it seemed appropriate to acknowledge this:

Also, I’m very fond of the website Chinese Etymology (字源) for a wonderful look at the origin of characters.

The book How to Read Maya Hieroglyphs, John Montgomery, 2002, Hippocrene Books was instrumental in my understanding the basic principals of Maya glyph block formation, particularly pages 43-45 which introduce the terms superfix, subfix, infix, prefix, postfix. I have used these terms throughout the lessons.

I am also indebted to the work of the [Foundation for the Advancement of Mesoamarican Studies Inc. (FAMSI)](http://www.famsi.org/index.html, for it’s work in illuminating and preserving Maya and related (Zapotec, Olmec, among others) languages and cultures.

The Maya script is a logosyllabic system which I find particularly interesting. I did not, in the end, take this approach when designing the syllable glyphs, but some word glyphs, such as ko and sin, take their form directly from the syllable glyphs.

The glyphs mun, pimeja, and kon were derived from Maya logograms:

The Maya culture is a contemporary culture, and Maya people continue to fight for their human rights. You can read more and donate at the International Mayan League. If there are additional resources you know of and would like me to share here, please let me know.

Mi’kmaq logograms, or ideograms as I have seen them referred to, were in use, as far as I can tell, from the 17th century or earlier, up through the 19th century. There is one published collection of this written language that I was able to find, Mi’Kmaq Hieroglyphic Prayers, David Schmidt ed. 1995, Nimbus Publishing, which presents a number of Christian prayers written in Mi’kmaq.

The text does not elaborate on principals or rules for the written language, but I found one repeating element, similar in shape to a backwards ‘S’ in the following passages: how am I going to be, how did they turn from, how do we want, how does he act, how does he react, how does he say it, how does one revive, how great is it, how is it, how many are there, how will he prepare them, is it like?, what are they named, what happens to them?, what is it, what is, what things, what will happen, what, and why.

I used this element as a semantic component in the following glyphs:

The Mi’kmaq culture is a contemporary culture, and Mi’kmaq people continue to fight for their human rights. You can read more at the Yellowhead Institute. If there are additional resources you know of and would like me to share here, please let me know.

Dongba symbols are the pictographs of the Naxi people of Southern China. Most of the sources I used to study them at the time were only on the internet, in Chinese, and no longer available, but an image search should lead you to newer resources if you are interested in learning more.

suno and wawa are both derived from Naxi Dongba

The Naxi culture is a contemporary culture and their written language continues to be used. In 2003 the Ancient Naxi Dongba Literature Manuscripts were submitted to Unesco for cultural preservation. If there are additional resources you know of and would like me to share here, please let me know.

This project, and sitelen sitelen, continue to evolve, just as all living languages do. Even languages we refer to as ‘dead’ change with our understanding and perception of them. The act of studying a language can enhance it, invigorate it, even bring it back to life.

The influences and principals mentioned above also continue to be a guide for this project. You can see this explicitly in more detail with the newer glyphs for nimi ku suli which were created in a collaborative effort within the toki pona community.